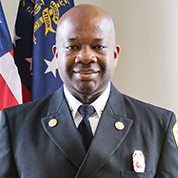 Chief Cedric Scott became Fire Chief of the Albany Fire Department on June 11th, 2018, after serving as the Fire Chief for the City of Suffolk, Virginia, a position he held for five years before coming to Albany. He began his firefighting career in Georgia with the Macon-Bibb County Fire Department in 1987 and moved up through the ranks to serve as the department’s Fire Training Chief. He has been honored to serve as Fire Chief of three Georgia Fire Departments, including Waycross, College Park, and Rockdale County, respectively. Chief Scott went to Suffolk after serving as the Assistant Fire Chief of Logistics in the City of Savannah, Georgia.

Scott has an extensive educational background, with an AAS degree in Health: Paramedic Technology from Gordon College and an AAS degree in Fire Service Administration from Macon State College. He also has a Bachelor of Business Administration degree from Mercer University and a Master of Business Administration degree from Wesleyan College. Chief Scott is a Certified Public Manager and has been approved to the grade of Member in the Institution of Fire Engineers (MIFireE) United States of America Branch, and has received the Chief Fire Officer Designation (CFOD). Additionally, he is a 2012 graduate of the National Fire Academy’s Executive Fire Officer Program.

Chief Scott was named Fireman of the Year in 1995, awarded the Bibb County 4-H Distinguished Service Citation (2000-2001). He was honored as a Star of Life by the American Ambulance Association in 2001.

Chief Scott and his wife Lydia reside in Albany.