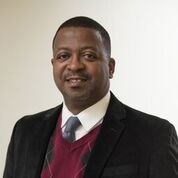 David Hamilton is a native of Cordele, Georgia and moved to Albany in June of 1992. He is married and the proud father of two children. David is a graduate of Georgia Southwestern University and has a bachelor’s degree in Business Management. His employment with the City of Albany began in 2002 as a Planner. David was eventually promoted to Director of Transit where he served in that capacity for four years. In March of 2015, David was promoted to the position of Transportation Director. This is a unique position since it is comprised of two departments, the Southwest Georgia Regional Airport  and Albany Transit.