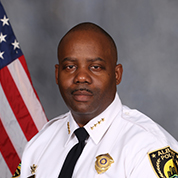 Michael J. Persley was promoted to the rank of Chief on May 23, 2015 and assumed the duties of being the Chief Law Enforcement Officer for the City of Albany. He has been employed with the Albany Police Department for 25 years and has held numerous positions within the department. He was previously the Gang Unit Commander, East District Police Commander, and Assistant Commander of the Albany-Dougherty Metro SWAT Team where he has served as an entry team member, assistant team leader, team leader and negotiations commander. His other assignments have included working in narcotics, general and gang investigations.

Chief Persley holds a Master Degree in Administration/Justice and Security from University of Phoenix, a Bachelor Degree in Criminal Justice from Troy University and an Associate Degree in Criminal Justice from Darton College. Chief Persley has over 2800 hours of basic and advanced police training. He is a graduate of the IACP Leadership in Police Organization and the Northwestern School of Police Staff and Command. He is a member of the Georgia Association Chiefs of Police and International Association Chiefs of Police. He serves on several community boards including Stop the Violence, YMCA, Leadership Albany and is a member of the Dougherty County Rotary Club.

Chief Persley is retired from the Georgia Army National Guard and served for over 22 years. He was an enlisted soldier and later commissioned as an officer. He held the rank of Captain at his time of retirement. He served this country on deployments to Bosnia-Hercegovina, Iraq and Afghanistan.