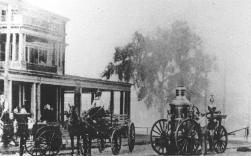 Since its founding in 1836, Albany always provided fire protection for the community. Of course, back in the early days, protection involved the use of a "bucket brigade", a simple system where water was passed in leather buckets from person to person until it could be thrown directly on the fire. As difficult as it was to set up, and tiresome for those participating, this system rarely resulted in the successful suppression of larger fires in most communities.

Today, telephones allow us to contact emergency services within seconds in order to respond to fire, police or medical services. In the early days of the City, things were not so easy. If a fire was discovered during day light hours, the first person to see it would call out "FIRE" and the word would be relayed until someone nearest the fire station would hear it.

Although there is no confirmation, the worst fire in the history of the City occurred on March 13, 1867, when twenty-seven buildings in the downtown area were completely destroyed. It is understood that the fire was of such magnitude, that fire companies just protected the surrounding blocks of buildings and let the fire burn itself out.

In 1893, a new chapter of the Albany Fire Department history began with the organization of a paid department. Albany became well known nationwide for its active fire prevention programs and fire free community.

The fire horse went by the wayside with the purchase of Albany's first motor driven fire apparatus in 1912. These faithful horses were given to the trash collectors, and it said that there were instances when the fire bell rang, that the trash wagons pulled by ex-fire horses, could be seen racing to fires, dumping trash in the street as they went. In a few short years, the horses were all replaced with motor driven apparatus, and the end of an era was at hand, never to return.

With the increase of population, it was necessary to provide for additional fire stations throughout the City, and later the County as well. In March of 1970, a new and modern headquarters was constructed at 320 North Jackson Street. This two story, 17,000 square foot structure, houses Station #1, administrative offices, training, fire prevention and supply. The old headquarters was demolished following the opening of this modern station.

At present, there are ten [10] operating fire stations, from which ten [10] engines, two [2] ladders, one [1] man power squad, two [2] fire units, a hazardous materials unit and one [1] battalion chief respond. Through a contract with Dougherty County, the entire County is covered by the department.

As the fire department moves ahead, changes for the future are already starting to take place. A combined communication dispatching system to include an enhanced 911 phone system, featuring a computerized dispatching [CAD] system, manned 24 hours a day. The planning of an eleventh fire station to be placed within the County to better serve the public, a dry hydrant system to supplement water supplies in the County's outlying areas, through the Emergency Management part of the department an increased awareness system for monitoring unnatural weather conditions, stronger involvement in public awareness through the use of fire prevention programs [Puppet House, Safe House, Children's Bounce House] designed to attract the attention of all ages of people within the County. All this with a dedicated staff of employees willing to meet the demands of public safety.

With 100 years of paid service and still growing; 174 employees, 11 fire stations, 36 pieces of apparatus, rescue water operations, hazardous material response. The fire personnel of the Albany Fire and Emergency Services stand ready to face the future and provide for this County, the best protection it can for the next generation to come.