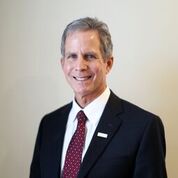 Phil Roberson was born and raised in Albany, Georgia. He attended Albany High School and Riverside Military Academy. After returning to Albany in 1974, he signed up as a Laborer in the Street Division of the Public Works Department. He rose through the ranks in that Division, and was promoted to the position of Street Superintendent in 1992.

In 2014, Mr. Roberson was promoted to his current position of Assistant City Manager for Utility Operations.

In this position, Mr. Roberson is responsible for the oversight of the following departments and divisions: