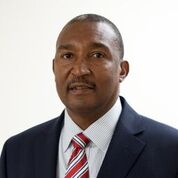 Stephen Collier has been a long time employee of the City of Albany, and he has worked his way up through the ranks. He was first hired as a Senior Storekeeper for the City of Albany Auto Parts Division on August 1, 1982. He served in that capacity for eight years.

In May 1990, he was promoted to Buyer in the Procurement Division. During his nine years as a Buyer, Mr. Collier received his Certified Professional Public Buyer (CPPB) certification. His primary focus was on the procurement of vehicles and heavy equipment.

Mr. Collier has over 37 years of experience with the City of Albany serving in various capacities. On July 3, 2014, he was promoted to his current position of Assistant City Manager.

In this position, Mr. Collier is responsible for the oversight of the following departments: